Gameplay Changes:
- Drained the bay south of the "Bitch Corner"
- Down-scaled most of the Ore fields
- Added a capture-able AA gun to both oil pumping stations
- Added a second Gem mine (originally only one on the west landmass)
- Moved the upper right spawn further to the right
- Added more building room to the "Bitch Corner"
- Added a second access point to the southwest spawn
- Expanded the middle eastern peninsula spawn
- Rearranged the cliffs surrounding the southeast spawn to closer resemble the Docklands version
- Added the small cape to the right of the middle eastern peninsula spawn to closer resemble the Docklands version and also add another landing area.
- Cleared the trees from the middle eastern peninsula's starting area
- Decreased most of the Ore field mine shaft counts from 2 to 1
- Removed most of the trees from the northeast spawn (had a tendency to stunt base growth and caused unit flow congestion)

Creative Notes:
I replaced the cliffs on the west edge of the map with water cliffs to show where the water used to be in the original Docklands. I also thought the previous version of the lower right corner spawn and where peninsula spawns were all too cramp to support a bases so I opted to make them closer to the Dockland versions.

I also couldn't figure out how to implement an 8th player spawn so I decided to leaved it at 7 players so players could keep an even 3v3 while an extra spawn could exist on its own for more independent lone wolf players. On top of that, (like I said before) the locations of the oil pumping stations made it near impossible to add an 8th player to the map without sacrificing the flow of gameplay and/or the overall look of the map.
I considered removing the Bitch Corner spawn by adding a little town in its place to even out the player count but, decided against it because I have a soft spot for that spawn and how much of a challenge it brings to the game.

I drained the bay by the Bitch Corner because I thought it was too cheap to allow everyone to be able to park boats right outside of that spawn and camp. I also wanted to acknowledge that the bay was originally a lake but, at the same time, didn't want to trick players that didn't look at the map into building a naval structure in an enclosed body of water.

To "drain" it, I swapped out all the water cliffs with regular ones and added tiny ponds/puddles inside to show where the water used to be. I thought it was also help make the south spawns less sheltered by natural barriers (especially the furthest south one).

As for subtle visual changes, I replaced the ruins outside of the northwest coastal spawn with a church because I thought the west continent needed more signs of civilian life to mirror how I added some residencies to the east continent.

On the east continent, I reworked the cliff corner I added to fill in the open area from the original map by removing the awkward Ore field and changing the lone corner cliff into a mountain pass with two extra paths for flanking (on top of the cliffs and along the coast) to make it look less shoehorned. 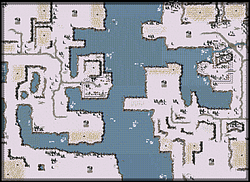