To be honest, I never saw the appeal of arena-style maps. I always felt they took away the sense of immersion from the game.

With that thought in mind, I tried to make a map that looked as natural as possible without sacrificing gameplay value. Rather than playing on the idea of equal playing field via symmetry, I prefer gameplay that requires players to learn their surroundings.

'Mountainous' is an large 1v1 map set in a heavily stylized version of the Ural Mountains.
The map is filled from top-to-bottom with narrow passageways, chokepoints, vantage points, and scenic locations (which include a gulag, abandoned mining facilities, and small mountain settlements).

I intentionally made the map as claustrophobic as possible in order to emulate the feeling of navigating through mountain passes while constantly fearing the possibility of an ambush.

I also tried to make the passages as maze-like as possible in order to see just how far I could push OpenRA's AI pathfinding.

After running a few dozen tests on the mapagainst both Normal and Rush AI, I learned that the AI is capable of learning in order to figure out as many ways as possible to flank player-commanded assault teams; turning the usual mass AI rush into a frantic 30+ minutes of guerilla warfare.

There's also plenty of resources around the map to utilize so don't worry about encountering any stalemates via dry reserves. 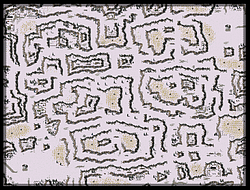