"Agricultural Revolution" is a 1v1 map inspired by a trip I had through the farmlands of Easton, Pennsylvania.

The map isn't meant to replicate any specific area of Easton but, instead emulate the landscape and atmosphere of Easton from when I traveled through it a few years ago.

If I was to specify which part of Easton I was trying I used as reference using only landmarks, I would say that the farmland and old Church (w/graveyard) by the north spawn was based on the Merrick farm; specifically the one with the baby goat playground.

As it's not meant to replicate Easton precisely, I included some scenic locations based on areas of North Jersey. The winding road in the northwest corner of the map is based on the infamous Shades of Death Road.

The mining operation west of the center of the map is based on the historic Sterling Hill Mines. It's not supposed to look exactly like it but, it was something I felt like adding it since the Abandoned Rail Mine asset was available.

As expected of me, I included plenty of capture-able civilian buildings because of my nostalgia for Red Alert 2's use of them.

I had some trouble trying to find a balance between Ore fields and farmland so the placement might look a bit sporadic.

Like most of my maps, I had a lot of fun making it.

== Changelog ==
- Removed the minelayer from the farm. It crashed the game. 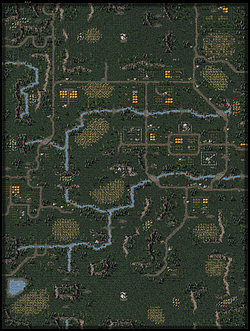