Living With The Nile
by RadicalEdward2

"There's only so many times a person can be denied..."

Tried to make a very literal pun map because I'm a horrible person.

The map is set in a vague area outside of Cairo along the Nile River. I would have made the river wider but, "longer bridges" weren't really a thing until Red Alert.

I tried to play with the term "living with denial" or "living in denial" by adding several bridges that when held long enough by either faction would eventually just force the opponent to seek another means of crossing the river (due to the destruction of the bridge(s) ).

This formula is complimented by how both ends of the bridge include a capture-able Guard Tower to help effectively cut down any infantry attempting to cross the Nile.

Each bridge can be detoured by using adjacent shallow crossings that are just far enough from the bridges that forces can cross and flank almost almost undetected (if the opponent isn't paying attention).

The map also features four capture-able SAM site installations on both sides of the river to deny rogue aircraft from making a Hail Mary for the enemy base(s). I added these to further play with the map's focus on "denial" by making air-based assaults difficult (or at the very least, a nuisance to carry out).

All the Tiberium fields near the starting areas do not regenerate; forcing players to eventually travel to the Nile to collect additional materials. I did this in reference to how the Nile River is perceived as a giver and taker of life in ancient Egyptian culture. Once all attempts to wean themselves off of outside resources fail, players would essentially find themselves relying on the Tiberium growing along the Nile for sustenance (even when their enemies are trying to hoard it for themselves).

The Nile's ability to give and take away life is also complimented by how Tiberium can be collected for resources but, at the same time, considered dangerous to human flesh. Because of this, if the Tiberium is left unattended for too long, it could overgrow and eventually become unavoidable by infantry (similar to how the flooding of the Nile would destroy crops).

(Again, I am a horrible person)

Seeing as the map is set in Egypt, I made a small excavation site along the northern edge of the map with cliffs hidden just far enough off-screen to imply the presence of the Great Sphinx of Giza. It's 100% intended as decoration but, included a capture-able Obelisk of Light (because Egypt).

To prevent this Obelisk from throwing off the balance of the map, I added one to the southern edge of the map surrounded by corpses to create some sort mythical scene. I dunno. I thought it looked cool.

To mirror the large Tiberium field close to the northern edge of the map, I added one to the southern edge in a crater surrounding a meteor. They were more common in Tiberian Sun but, I thought it made for a nice touch (filling in empty space at the same time).

This may not seem like a big deal to most people but, I went out of my way to make sure I didn't include any cacti on the map. Apparently, cacti aren't native to Egypt and any presence of them in the country are considered the result of outside influence.

The geography of the map isn't based too heavily on the actual land along the Nile but, I was influenced map for the mission, Tomb Raided, from Yuri's Revenge; rougher terrain in the south, oil fields to the east (the southwest ones for balancing), and flatter land to the north (where the Valley of Kings would be).

Reports of Living With The Nile 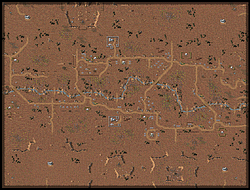