Brink of Disaster
by RadicalEdward2

"Brink of Disaster" was Entry #61 in noobmapmaker's 2017 Map Design Contest.

Brink of Disaster is a remake of a map from Red Alert 2. I don't know why but, it's one of the few arena style maps I actually liked in Red Alert 2 (probably because the scenery on the original map does such a good job masking the fact that it's one).

Kind of like A Little Piece of Dune and Tiber River Valley, Brink of Disaster is almost identical to it's original with things like building and tree placements. I tried to match the type of trees as well (pines are where pines were, oaks are where oaks were, etc).

I tried to fill in the empty map edges present in the original version with fluff like mountains and forest clusters because the map looked pretty ugly without anything along the edges like in the original.

I also placed Ore Silos wherever grain silos were present and civilians wherever cars or livestock were present because there aren't any real civilian vehicles in RA like there were in RA2.

I tried to pick the civilian buildings based either on how close they resemble the ones in the original version or by similar their color palettes are (whenever I couldn't find buildings that were architecturally similar).

Due to how spaced out all the tree are in relation to how they were in the original, the map interestingly plays more like a Red Alert 2 map than a Red Alert 1 map (which isn't too surprising).

Like "A Little Piece of Dune", I compensated for the lack of capture-able Civilian Airports by using Airstrips as substitutes however, I only placed one at each location instead of two side-by-side because I didn't want to draw too much attention to the free airstrips. I placed some barbed wire around them so they wouldn't look out of place.

I also tried to play around with map's namesake by replacing the center Ore mines (drills in RA2) with Gem mines. By doing this, the land value in the center of the map would quickly escalate once the gems start replacing the ore; literally sending matches towards the brink of disaster.

The only really noticeable difference from the original would be the location of the lower left spawn's ore field. I never liked how it's off placement threw off the shape of the rest of the map.

Reports of Brink of Disaster 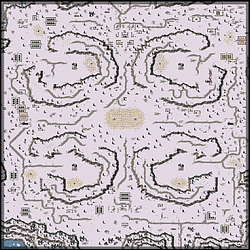