When the entry period of the contest drew closer, I came up with an idea for a desert map set somewhere in the western United States.

The layout of the map is kind of erratic because I wasn't sure if I wanted the map to be a team map or a FFA map and at the same time, I wanted to just make a map that looked more like it could exist in the real-world instead of one that's designed for gameplay.

With that in mind, I went overboard with the civilian buildings in an attempt to make new scenery without actually having to mod stuff into the game.

I tried to make Native American cliff dwellings (like the Cliff Palace at Mesa Verde National Park) by stacking multiple adobe houses on top of each other with just enough spacing among them to make them look interconnecting or modular.

In terms of the overall look of the map, I tried to give it a feel like the Grand Canyon without actually trying to make a copy of it.

I would say that this map is fun for long range artillery combat because of all the narrow cliff pathways.

- Straightened out the left end of the river to remove the "7"-shaped curve (Pathfinding caused southwest forces traveling north to gather and stay there). 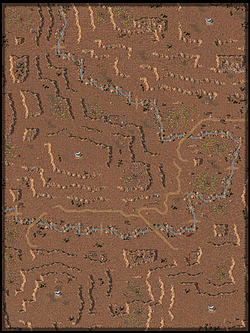