A Little Piece of Dune
by RadicalEdward2

"A Little Piece of Dune" was Entry #56 in noobmapmaker's 2017 Map Design Contest.

Since I already remade a bunch of maps from Renegade, I decided to try remaking a map from Red Alert 2. I chose A Little Piece of Dune because I have a thing for naval maps. It's pretty straight-forward as a remake.

The only real difference from the original is that I placed two Airfields in place of the Civilian Airport as a tech building. I thought it was a nice compromise for the lack of paratroopers as an unlockable ability for all factions.

Giving away Yaks isn't too bad since Allieds can't unlock the MiG. I don't really have much of a counter-point for if Soviets capture the airfields aside from how inconvenient it is to micromanage airfields outside of their actual base.

I added two capture-able Pillboxes as light defenses because you can't really build outside of the MCV area like in the older games. So I tried to work around that by adding two expendable defenses that only help repel ground units. Adding anti-air defenses would be a bit too much for an optional tech building.

From a creative standpoint, my only pet peeve was that the lighthouses are exclusive to the Temperate theme (as though lighthouses in any place without grass is an alien concept). Because of this, I had to place other props where the lighthouses would have been; ruining the maps chance of being an exact remake of it's Red Alert 2 predesuccessor (it's the next game in the series but, remade in the game that came out before it in a remake of the old game that came out after it).

Aside from the lighthouses, the map is almost identical right down to the jungle huts.

Reports of A Little Piece of Dune 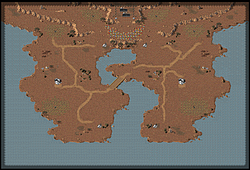