"Wickedly Restless" is an alternate version of my map, "Mountainous".

I was bored and wanted to see what my mountain map would be like if I flooded it with water and made it into a naval map.

It's amazing what you can create just by switching out the cliff tiles with water cliff tiles.

Originally, I was going to call the map, "Mountainous Archipelago" but, I was suddenly recalled a map that felt similar to this one.
In Red Alert 2, there was a map called, "No Rest for the Wicked". It featured a mess of cliff islands that were tightly packed together with navy combat playing a big role. The map also featured bridges but, the one only aspect I really drew from was the maze of islands.

Like Mountainous, Wickedly Restless is very claustrophobic except this time with boats and submarines.

I left some wolves on the map somewhere. Have fun watching out for them.

The map works better for online than offline but, you can try playing against the AI. Just don't expect it to put up much of a fight. 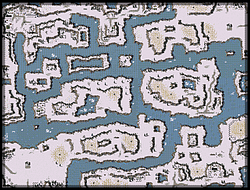