While I do understand there's a bit of stigma towards Tiberium Wars, I have a weird obsession with the skirmish map, Tiber River Valley, because it's the only time the Tiber River area is ever visited in-game outside of being mentioned throughout the C&C series.

With that said, I put a bit more effort into making this map as faithful to the original as possible; not because remaking old maps is easier but, because I wanted to challenge myself by trying to replicate the ENTIRE map (tree/building placements and all) to see what the in-game Tiber River Valley would have looked like over 70 years prior to how its depicted in Tiberium Wars.

While the map did receive some flak during SoScared's stream of it because of how bizarre the map's layout was, that's because it's post-Westwood level design.

Hands down, my favorite remark about the map has to be, "This is by far the most autistic TD map I have ever played on-stream."

I would definitely agree that Nod loses their element of surprise on this map due to their airdropped vehicles (something not present in the original map). At the same time, it does keep opponents on edge wondering why so many vehicles are being delivered.

The funny thing is despite all the hate towards the map, it played exactly how I expected it would (exactly like it would play in Tiberium Wars):

- Move your base to Blue Tiberium
- Try to capture and defend the Adv.Comm.Center (the EMP Control Station in Tiberium Wars)
- Get too invested in defending the free superweapon
- Get rail'd

With all joking aside, the only reason I placed the Advanced Comm. Center where it was was because it was closest thing in-game to the EMP Control Station (both in how long it takes to charge and how small of a controlled area the blast would hit).

I actually did think of adding a second superweapon building to the opposite end of the map but, decided against it so that the path could be used for flanking since there's no areas of visible strategic value at that end.

Additional Notes:
I wasn't joking when I said I placed every single tree where it was in the original map. At first, I thought "this is stupid" but, as time went on, I actually found myself laughing at how much detail I was trying to add to an otherwise forgettable map.

One other small detail, I added dirt patches to the south areas of the map where the ruptured ground would be in Tiberium Wars and even added rivers along the end of map because the original map surprisingly didn't have any (despite its namesake). 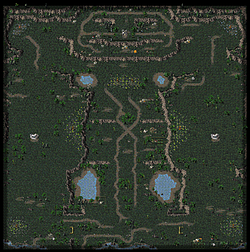