"Deep in the Ural Mountains near the town of Mezhgorye is an alleged Soviet underground facility that is believed to span over 400 square miles. The facility's purpose and contents are so classified that entry by unauthorized Soviet personnel are met with indiscriminate hostility (regardless of the commander's rank or directive)."

I know the Interior theme isn't intended to be used for skirmish/multiplayer maps but, I wanted see what I could make do with it.

My main drive for making the map was the idea that there could be dozens or even hundreds of other underground Soviet installations that weren't even seen in the original game's campaign.

Admittedly, I had way too much fun adding little details that would otherwise be overlooked.

I tried to follow some OSHA regulations based on a place I used to work at to give the facility a bit of authenticity:
Safety markers outside of doorways to where vehicles pass to prevent accidents, curved corners in areas of the vehicle tunnels that would have blind spots or tight turns, and even emergency phone boxes that could be used to report incidents from anywhere in the tunnels.

In terms of gameplay, Yamantau focuses heavily on close-quarters combat and guerilla tactics instead of the steamrolling style offered by most "outdoor" maps. Aircraft and Missile Silos are also disabled by default but, Iron Curtains and Chronospheres are still available. I wasn't sure how to disable the Allied GPS Satellite though.

--- Known Issues ---
- The game's enemy player AI doesn't know how to navigate Interior maps. It tends to just build its base, produce an attack force, and then never leave its base. Because of this, the map is stronger for online since it requires an actual human to navigate it.

- The walls aren't recognized as actual solid barriers so units can actually hit targets in other rooms as long as they are within their firing range (applies with all units).

- Projectile flames (from both Flame Towers and flamethrowers) can pass through walls and hit their targets instead of splashing upon impact with obstructing walls.

- Artillery, V2, and Tesla bolts can all arc over the map's walls like they would with concrete base walls; disregarding the interior's ceiling.

I can't really do much about these issues because it has to do with the actual game and not the map itself.

== Changelog ==
- Removed the minelayer from the vehicle depot. It crashed the game. 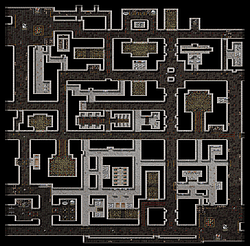 I'm currently working on a demake of the map for Red Alert Remastered. I'll post a link for it when its on the workshop :)

"- Removed the minelayer from the vehicle depot. It crashed the game."
if you put a new minelayer there it should work.
it crashed because the minelayer changed
https://github.com/OpenRA/OpenRA/pull/12540

Its totally fine. The minelayer was entirely for decoration anyway. I replaced it with something else anyway but, I definitely appreciate the input.