Battle for Bacolor
by RadicalEdward2

This map kind of has a story behind it. Back in March 2017, my grandmother passed away. I was really close to her. During the time I spent in Macabacle, Bacolor, Pampanga, Philippines for her 3 day wake and burial, I made this vague replica of the area surrounding her neighborhood to cope with her loss.

After I finished the map, I sort of fell out of the loop of map making for OpenRA because I started to associate map making in the game with that particular memory (perhaps the darkest point in my life).

Returning to the game a little over a year since her passing, I made the decision to release this map so I could finally have some closure.

The map itself isn't intended to be a spot-on replica of the area but, more based on the areas I remembered the most fondly when my grandmother was still alive.

The upper right starting area is set on the right hand side of the road that makes Macabacle.

The long stretch of elevated road that divides the map is supposed to be Route 3 (Jose Abad Santos Avenue).

The church in the walled-in area with watch towers (north of the lower starting area) is supposed to be the San Guillermo Parish Church.

The large urban area north of Rt.3 is supposed to be a combination of both San Juan and San Jose.

The northbound elevated road that divides the upper portion of the map is supposed to be the Mega Dike Access Road.

The town in the lower right corner of the map is supposed to be the section of Capital Blvd. that leads to San Fernando.

The series of seemingly pointless concrete wall areas are supposed to represent generic residential/commercial subdivisions that often feature walled perimeters to designate what plots of land belong to any particular property owner.

I guess in the sense of authenticity, its nowhere near identical to its real-world counterpart but, I'm perfectly fine with that since I never really intended on publicly releasing this map until now.

If anyone actually took the time to read all of this, thanks for taking the time to do so.
I might get back into the habit of making and publishing maps. I'm not entirely sure yet.

Reports of Battle for Bacolor 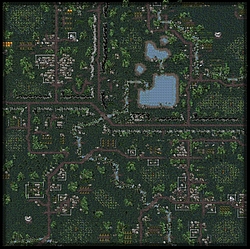