Fields of Green
by RadicalEdward2

"Fields of Green" was Entry #62 and winner of the FFA category in noobmapmaker's 2017 Map Design Contest.

This is definitely one of my stupider maps. Its a sadistic version of "All That Glitters..." from Red Alert 1.

Wherein "All That Glitters..." your concern was trying not to accidentally blow up any of the non-regenerating ore, in Fields of Green, you have to try to not touch any of the "ore" because it'll kill you.

Like in "All That Glitters...", the Tiberium doesn't regenerate but, I did place two pairs of fenced off 3x regenerating Blossom Trees near the center of the map. If the fences were to be broken, it would take the Blossom Trees roughly one to two minutes to reach the major body of Tiberium.
From that point, it becomes a race against the clock as to who can survive the longest before the Tiberium starts to flood into the base areas.
If superweapons are enabled in an "all Nod" match, all bets are off.

I added some Oil Derricks for additional income but, they're really red herrings (at least I think they are). The real strategic points of value are the two Hospitals (to regenerate infantry health for them to survive longer in the Tiberium) and the single Bio Lab (to travel the map freely) which is protected by Chemical Troopers.

I was actually surprised that this map actually got nominated for the FFA category of the contest instead of any of my other maps. I honestly didn't think anyone would even look at this map.

At the same time, I guess having a map that constantly changes based on how quickly you can harvest does make it somewhat interesting since it allows the terrain to actually have RNG.

Reports of Fields of Green 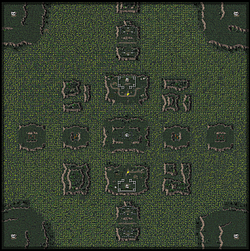