Like Under and Walls, I made Field to see how the Renegade version of the map would play in the original RTS.

I also tried to include the concrete walls from the original version of the map. They help give a general idea as to where the buildings would be in Renegade.

Lastly, I got a bit carried away with the "outside" areas of the map because I have a thing for little details (especially to the northeast of the GDI base).

--- Changes ---
- 05/07/17 -
- Helipads are now disabled to make the map play like the Renegade versions.
- Added more Tiberium to the Field itself to lightly compensate for the imminent mass production of Harvesters (counted how many patches of Tiberium were added to keep both fields balanced).
- Kept SAM sites enabled in the event Airstrikes will ever be able to be hit by anti-air defenses.

--- Notes ---
- The Watson AI has some trouble processing the lack of Helipads and isn't really worth fighting against.
- The AI still spams defenses along the middle crossing (out of my control)
- Might make a version of the map based on the Renegade X version with the outer-laying hill paths. 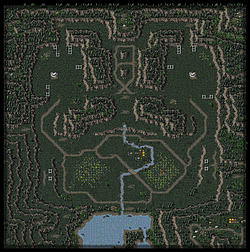