This is a Z remake map with openra units

You can capture flags and receive the nearby buildings.
Flags will give you money like oilderricks, mainflags give 300$ the other ones 200$

You can build units in the buildings by clicking on them and each building got its own production queue.

You have a mainbase at start with wich you can only build defense structures ( no walls ) next to your captured flags and your conyard, if you set a defense structure it will last a while until the next one can be set in the same area.

All defense structures wich already exsitist from the beginning can be captured by conquering the nearby flag, all new builded defenses can not be captured that way.

All Vehicles got a speedreduction, tanks are slowed down by 25% all other ones and the Light tank have a higher reduction, this is made to make it fit better to the original Z and prevent the game to end so fast.
There are 2 different fences wich will dissapear after a while. they will open rooms next to your starting place, the 1st one will open the room to your radar and the 2nd will release your Tech center and iron curtain or chronosphere.

MCV and oretrucks can not be build

The default setting of this map is "Normal" in lobby option so it will follow the rules of an Interior map wich means: no aircraft, no GPS, no Nuke

You can also choose "With nuke" wich will create a nuke silo for the middle flag wich will be ready in half the time of the standard ra nuke.

You will beat a player if you capture all his flags and destroy his mainbase.

The playerslots are forced to the spawnpoints in the gamelobby.

The game will start after a short starting sequence.

There will be scientists wich are working on the computers, they are non combatants .

There will be 4 fields of randomly created boxes barrels and ammo boxes between the players, all of the 4 fields will have the same sice and a flag in the middle.

The ai is programmed to capture flags, Rush ai is the strongest, normal ai is medium and turtle ai the weakest one. (This is my personal feeling about the strength of the ai)

You can play this as teamgame, ffa or 1on1

I recommend you to test this game with ai, it is fun to play against him and you can try out how to play it.

(Winner of the Map Design Contest 2017 by NoobMapMaker) 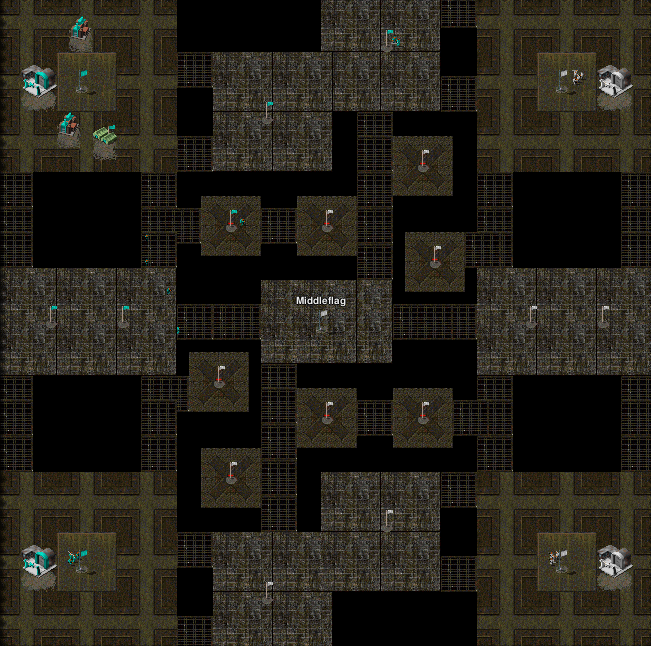