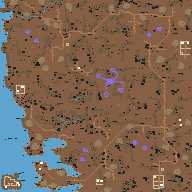 This map is my modest attempt to bring Fallout 2 world map wasteland to life through OpenRA.

Relative lack of resources forces players towards GEM mines that are placed in the middle of a "spawn triangle", i.e. where 3 players are spawned in each corner.

The center of the map contains a lot of gems, but you will eventually end up in the crossroads of pain if you decide to set your operations there.

The island in the lower left corner represents "The Enclave" (i.e. the oil rig; it has some nice tech, but is heavily guarded).

Navarro base in the mid left part of map contains a Ukrainian airfield guarded by several shock troopers and a commando.

I hope that the map doesn't lag for you. Most players I've tested so far was 6, and it worked without issues.