---------
This map is an adaptation of the popular 1v1 "Sidestep" map, made by SoScared.
This version aims to explore the possibilty of transforming 1v1 maps into team maps, while keeping the aspects of the map that give a quality gameplay.

- v0.3b :
Decoration + oil placement changed (all oils are contested)
- v0.3 :
In v0.2, seemeed to be played as two separate 1v1, due to ore placement in the top and bottom edges, encouraging players to play there. Center was ignored.

Brought back asymmetry, to force center play, + moving 2 oils there. Making sure no players moves to get two double patches.

- v0.2 :
Tweaked ore placement, and obstacles, in order to avoid base creeping and high strategical positions.

- v0.1b :
Fixed author name
- v0.1 :
First version, trying to layout the different routes and strategical points, based on the Sidestep map, but adating it to a 2v2 context.
Size : 96x112, first try with a rather small and dense map for 2v2. 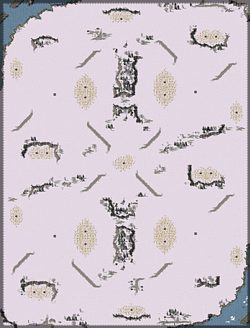