A fight to death. The prize is your soul.
Command & conquer ! Be the Shadowfiend.

"Your soul is mine!"
(Homage to a hero from Dota - Nevermore the Shadowfiend)

Since Shadowfiend´s first revision was uploaded over a year ago (Jun. 10 - 2016) it´s design has faced several issues, as the meta shifted and the average skill level in the 1v1-scene rose. Time has come to rework Shadowfiend !
I present to you Shadowfiend II ! (14 mines, 5 derricks, 90,000 $ starting ore)
Thanks for all the feedback through all channels !
(even if firstly i didn´t seem to be too happy to hear them ;) )
Keep it coming !

revision 3:
- added roads to the outskirts of the map (towards derricks)
- removed gem mine and debris mid
- added wooden crate surround by a fence to mid

revision 5:
- replaced a pathblocking tree (top left derick)
- replaced the crate with a derrick and debris 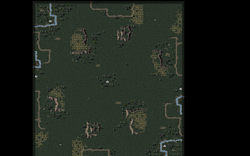